The Gold Medal Award is given to one of our esteemed colleagues for furthering the goals of the Prosper Meniere Society through research excellence, scientific innovation, and far-reaching contributions to the investigation of inner ear disorders. 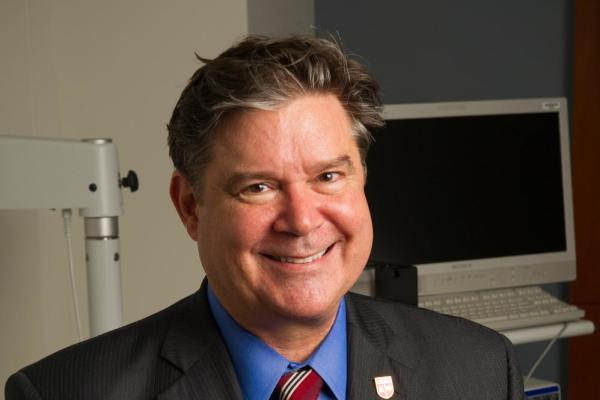 Dr. P. Ashley Wackym is a seasoned administrator, investigator, and surgical otologistneurotologist and skull base surgeon. He is currently the Chair of the Department of Otolaryngology – Head and Neck Surgery at the Rutgers Robert Wood Johnson Medical School and a Chancellor Scholar of Rutgers Biomedical Health Sciences.
Dr. Wackym’s clinical emphasis is on cochlear implantation and skull base surgery as well as other hearing and balance disorders. He is particularly well known for the surgical management of patients with superior semicircular canal dehiscence. His basic research was funded by the National Institutes of Health for over two decades in the area of gene discovery in the inner ear. Currently his research is focused on cognitive dysfunction before and after surgical management of third window syndrome, cochlear implantation, outcomes of Gamma Knife surgery, balance
disorders, and the development of new biomedical engineering technologies. He has published over 170 papers, 60 book chapters, and 20 video productions and has edited three books, including the 18th edition of Ballenger’s Otorhinolaryngology Head and Neck Surgery. Dr. Wackym has received numerous national and international awards, including the Nicholas Torok Vestibular Award of the American Neurotology Society, the Edmund Prince Fowler Award, a Presidential Citation from the American Laryngological, Rhinological and Otological Society, and the Honor Award and Distinguished Service Award of the American Academy of Otolaryngology-Head and Neck Surgery. He has also served as President of the Collegium Oto-Rhino-Laryngologicum Amicitiae Sacrum, the President of the Association for Research in Otolaryngology, and the President of Otology and Neurotology, Inc.